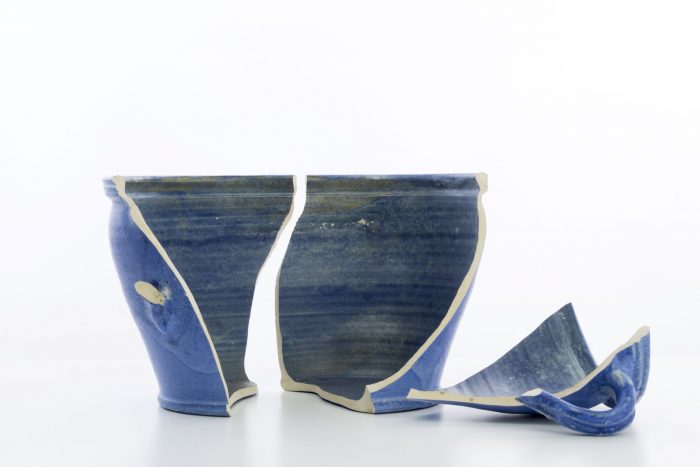 The Importance of Metaphor and Name

Home » Blog » The Importance of Metaphor and Name

About a month ago, Wade was unloading the dishwasher. He accidentally broke a small ceramic bowl we use for cocktail snacks like Chex-mix or nuts.  He bought this small bowl when he lived in New York City from a friend who is a potter and ceramics teacher. He purchased the bowl because in the bottom of the bowl, painted in traditional blue glaze, is the date 1965. It’s the year Wade and I were born. Yes, we are clears throat that old.

I heard the bowl break and came into the kitchen.

“What just happened? “I said.

“I dropped the bowl on the countertop. It’s broken now. I’ll throw it away,” he said in a disappointed voice.

Cause I want to fix it!”

“How?” Wade gave me a look. He knew I was up to something.

I have a lot of interests and like to do many things. I’m a Four on the Enneagram, and my top two StrengthQuest strengths are restorative and input – I want to fix things and collect stuff. I have a studio full of UFOs – Un Finished Objects.

I reminded Wade that his aunt Sylvia, a talented artist, practices the art of kintsugi. What’s kintsugi? I remark how we had not seen his aunt and uncle for quite some time. Has it really been almost 15 months since we had dinner and watched a movie with them at mom’s house?  I said we should get in touch with them, have lunch, and Sylvia can teach me everything she knows about kintsugi. He agrees this is an excellent idea. I still don’t know what he’s talking about, but it’s best to play along. So, I get a Ziplock baggie, gather all of the broken pieces of this lovely, shattered bowl, and stow it away with all the other UFOs in my studio.

Kintsugi is not just a method of repair but a philosophy. It’s the belief that the breaks, cracks, and repairs become a valuable and esteemed part of the history of an object, rather than something to be hidden. That, in fact, the peice is more beautiful for having been broken.

Learning From the Master Artist

Last Saturday we had a lovely time with his aunt and uncle. Sylvia fixed lunch for us, and we had a wonderful time eating out on the deck. Sylvia then took me into her studio and taught me about what kintsugi was and how to repair the bowl. She showed me several of her pieces, including this incredible Cherokee pot she’d restored that was made by a well-known western North Carolina Cherokee potter who lives and works in the Qualla Boundary. She gave me a few supplies and a flower bud vase she’d repaired for me to use as an example. I thanked her for her time and expertise. We said our goodbyes and came home.

The Scars of My Vessel

This week I worked on the bowl, applying the art of kintsugi – the Japanese art of putting broken pottery back together with gold. It’s built on the Zen Buddhist idea that you can create an even stronger, more beautiful piece of art by embracing its flaws and imperfections. The scars of the vessel are part of the design. I carefully glued the shards back together, used tape to hold them in place, and let the glue dry. I scraped away the excess glue, cleaning the scars as best I could. Then using lacquer mixed with gold dust, I painted the veins and the tiny missing areas. I let it dry.

Kintsugi as a Metaphor

I’ve always appreciated the importance and power of metaphor. I recognize that sometimes in repairing the things in us that are broken, we come to understand ourselves as more unique, beautiful, and resilient. Kintsugi as a metaphor helps me reframe my career challenges and hardships to see myself not as a victim of my circumstances but as someone who is coming out on the other side of this experience more accepting of my flaws and imperfections.

One of my perceived imperfections I’ve carried around for a time is my name – James McKinley Brown. I’ve struggled my entire life with my name. To me, my name is too common, simple, yet fragmented. My family and friends call me Jimmy or some variation. My dad calls me Jim. When I became a college professor, I wanted to be called Jim, and my dad honors that nomenclature. It sounded more professional. The IRS knows me by my formal name James Brown. This has been problematic for many reasons.

I’ve never found a way to use my middle name, McKinley. I adore my middle name. How many people do you know who are called McKinley? I’ve met two individuals in my life who used McKinley as their first or middle name. I like the way it sounds – literate, presidential, unique.

McKinley feels like a single shard from a different vessel that stands out from all the other parts of my name. It’s not like James, Jim, Jimmy, or Brown. Those parts of my name are like the plain pieces of an ordinary clay pot. No, McKinley is more like an ornate, colorful part of my name that I have always wanted to go by because it feels more like who I truly am. Interestingly, McKinley is a Scots Gaelic patronymic meaning white warrior or fair hero. McKinley also comes in the middle of my name, breaking the two common parts in half.

The Beauty of Our Imperfections

My career pivot journey into instructional design and eLearning has required a great deal of soul searching and mending. I’ve struggled with who I am professionally. I’ve gone from being J. McKinley Brown to James McKinley Brown to Jim Brown. It’s hard when your name is so common, and then not. Jim and James Brown were taken long ago on social media and domain names before I ever decided to transition into a new profession. So, I have settled on Jim McKinley Brown with all of its flaws and simplicity. The art of kintsugi, mending the three shards of my name together, has been a powerful reflective moment for me.

I admit my errors, expose my vulnerabilities, and show old wounds. My imperfections are gifts to be worked with, not shames to be hidden. The three parts of my name Jim | McKinley | Brown, are shards representing who I am. Jim, the professional and your friend. McKinley, the unique, artistic warrior. Brown, the commoner. Fused with glue and gold, my name represents the essence of me and who I am now.

As you journey through your career transformation, I hope you find the beauty in your flaws, which is the true essence of kintsugi. Embrace the imperfections and find your glue and gold that join together the shards of your life now made beautiful and renewed. My small clay pot is more lovely than before. If you run your fingertip over its surface, you can feel the cracks and imperfections made new by veins of gold. My vessel is renewed and on display and ready to hold some nuts or Chex-mix again. I hope that you too will display your damages with pride, held together with precious metals, and be ready to share with others the gifts of imperfection. Oh, and by the way, please call me Jim!

I'm a freelance instructional designer and eLearning consultant with over 30 years of experience creating meaningful and engaging learning experiences for people of all ages.